Minty Sakura is a young girl with pale skin, rosy cheeks, and bright green, almond-shaped eyes. She appears to wear a deep cerise lipgloss. She has short, malachite green hair with classic fringe bangs across her forehead and two longer, layered bangs on either side of her face. She accessorizes with two raspberries and a pink, Japanese Pocky stick and wears her hair up in a chocolate-drizzled bun. The scrunchie also appears to be made of hard chocolate.

Minty Sakura wears a light raspberry kimono accented with pale fuschia trimmings and a white obi sash. Her leggings are deep brown with pink polka-dots, and her shoes are black with pink streaks on top. These parts of her design are identical to that of Candlehead. 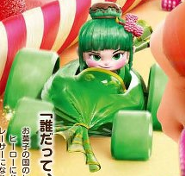 Minty Sakura and her kart 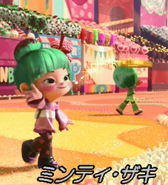 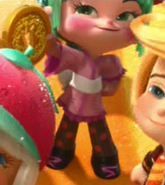 Can you see me?

Look how cute she is

Minty Sakura in the game

Stats in the game

Add a photo to this gallery
Retrieved from "https://sugaryrush.fandom.com/wiki/Minty_Sakura?oldid=5798"
Community content is available under CC-BY-SA unless otherwise noted.